It seems that there is no escaping the 'Fifty Shades of Grey' phenomenon. It's one hell of a publishing juggernaut, isn't it?

Well, curiosity finally got the better of me this week and book one in the trilogy found itself on my bedside table. Being honest, I wanted to know what the fuss was all about, which I guess is the reason that many other people are buying it too.
Before I tell you what I thought, I will confess to being Fifty Shades of Envious of the authors success, hats off to her for picking up the ball and running with it.

Right, so to my verdict. I'm seriously underwhelmed.

I'd been told to expect rough writing, and sure enough, it felt rough enough to take the skin off my fingers in places. The main character, Ana, bit her lip so often I wanted the damn thing to fall right off her face,  and if she mentioned her inner goddess once... while, lets just say she mentions it regularly. There are other oft repeated phrases, and once you pick up on them they really, really irritate. Like, REALLY. Enough to want to set fire to the book kind of really.

Writing aside, the story itself felt painfully thin to me. The heroine was at times too stupid to live, and I failed to empathise with either of the two main characters - for the life of me I just can't see why women are falling for this man in their legions. Sure, he's dominant - but not in a sexy way for me. Sex is obviously the main thrust of the book (forgive the pun, I can't help it), but to me the sex just felt, well, deeply unsexy. Sorry ladies. I didn't fall for Christian Grey, and I def won't be buying books two and three.

In the interest of fairness though, I may have been biased slightly by the fact that I read 'Bared To You' by Sylvia Day directly before reading 'Fifty Shades of Grey'.
It came recommended by a fellow minx, and wow, it's one HOT book. The two books are undeniably similar in some aspects, but for me 'Bared To You' stands head and shoulders above in terms of writing and complex character development, not to mention that it's much, much sexier. It's more sophisticated, more polished, more believable. It's just more. I am totally Team Gideon Cross, and will be buying book two of the trilogy when it's released in October.

'Bared To You' is the book I wanted Fifty Shades to be. 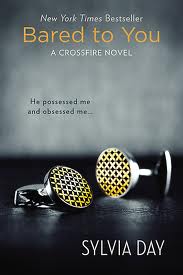 Hi Joanne! I've just deleted 50 Shades from my kindle after realising my 12yo shares the Amazon account and could probably get her paws on it. Cant believe i didnt pick up on that before. Anyway...I was only halfway through it but pressing delete didn't cause me a moment's regret. I didn't find I could relate to the characters, especially Ana. I know many will disagree but for me it didn't live up to the hype.

Ooo err Charlotte, good call -it's def not a book for young eyes!

I wanted to be impressed with it despite the polarised responses it's drawing from people, but it just left me feeling meh. And a bit grubby.

Congrats on your sale, by the way! I've just read your call story on your blog and grinned for you, and for Dave the pee'ing dog too. Lots of luck with your new career. x

Whoop, another member for Team Gideon! Loved Bared To You. Haven't even been remotely tempted by FSOG!

My favourite part of FSOG? When Ana finally walks out after the belt beating.

I work in the Violence Against Women agenda and this book didn't sit comfortably at all.

Can absolutely see where this was fan fic and based on Twilight. Ana is every bit as spineless a heroine as Bella was. I want to bang their heads together!

Thanks for taking one for the team, Joanne! My mom read the entire 50 Shades trilogy. My MOM, who still swears she doesn't read erotica. I just may purchase Bared to You to show her what a truly hot book looks like. Life is too short for 'meh' romance. :-)

Glad to know I'm not the only one who felt this way. I'll pass on books two and three.

Thanks for the recommendation of Bared To You. I'm off to find it now. Yay!

Hey Maya, thank you for the recommendation of Bared To You! Sick to your gut where FSOG is concerned, you'd be let down after Gideon...

Scarlet, isn't she just SO Bella? Limpet! That's one of the differences with Bared To You, Eva (the MC) is a strong, feisty girl with her own mind - and her own hang ups.
Ana just seems to be a blank canvas, so 2D.

Sutton, would love to hear your thoughts on Bared To You if you do read it. From what i've read it was self pubbed originally, and has now been picked up by Penguin for a tidy sum. Hope you enjoy it as much as Maya and I did.

Joanne, I agree totally with you. Sylvia Day's BARED TO YOU is so much better.

And, Natalie, what if your mom not only read books like that all the time, but wrote them too. :-) My daughter can tell you about it. LOL! Plus she's my beta reader.

I haven't read it, but I'm usually late in reading what's in anyway. It doesn't sound like my kind of book anyway.
When I finally read Twilight, I didn't see the hype in that either.

Hi Carla, I love that your daughter is your beta, that's very cool! I bet she's very proud of you.

Hey Jennifer, you're really not missing much. Save your reading time for the good stuff. :O)

He is a totalpsycho, isn't he Jackie? I just cannot see the appeal in him. Ann summers must be doing a roaring trade in shackles and whips though, eh?

Fab. And for more fun on this, check out this blog site for a GREAT (on-going) review of "50.SofG" It's hilarious!!
http://quillersplace.wordpress.com/