Lorraine has done something a little different for us today: she has interviewed the hero of her novel.

Thank you for having me here today, Minxes! I had a fun time arguing points with Theodore Garrity, the hero from Her Unlikely Bodyguard, released on June 15th. Available at Breathless Press and major online retailers.


Teddy's Most Embarrassing Moment:
LN: That would be when Jemma Leigh saved his hide. *Chuckles*
TG: Damn! I'll never live that down.
LN: Nope! Some bodyguard you are!
TG: Hey! It all worked out.
LN: Yeah, thanks to me.


Finish this sentence:
LN: When Teddy's in the laundry room, he's looking for clean socks.
TG: No, I'm doing laundry.
LN: No way! Not one scene in that entire book had you doing the laundry.
TG: Well, you couldn't be there all the time. And I did help bring clothes in off the line. At least you managed to record all the important stuff.
LN: *Smirking* Probably more than you realize.


Favorite Toy:
TG: I don't play with toys.
LN: You treat that big brute of a truck you drive like a toy.
TG: I do not.
LN: You do! And instead of playing around with your gears, you should watch where you're going.
TG: I do watch! That was an accident.
LN: Uh, huh. Tell that to Jemma Leigh.


Favorite Car:
TG: That would be my Dodge Ram 4x4.
LN: That's not a car! They asked for your favorite car.
TG: My favorite car, if I ever feet I need one, is a Jaguar.
LN: Oh, flashy.
TG: Gotta keep up appearances.


Favorite Scent:
LN: Oh! I've got this one…lilacs.
TG: Women! There's more to life than flowers.
LN: Maybe so, but they asked for my favorite scent. It certainly isn't whatever cologne you're wearing.
TG: This happens to be a very subtle scent, and besides, Jemma Leigh likes it.
LN: Hmmm, gotta have a talk with that girl.


Favorite Movie:
TG: Anything with Sylvester Stallone in it.
LN: *snort* That's a favorite actor, not movie.
TG: Woman, do you have to question everything I say?
LN: Why not? You gave me a hard enough time, butting in when I was trying to write your story.
TG: I had to make sure you got it right.
LN: Ha! Give me a break, will ya? I brought you into this world. I can take you right back out.
TG: *Superior grin* No one else wanted to work with you, so you're stuck.
LN: There are many more where you came from, buddy.
TG: But none fit the bill as good as I did, and besides, it's a done deal. Our book releases in twelve days.
LN: Our? I hate to admit it, but it is one of my better works.
TG: Guess my charm won you over.
LN: Could be that Jemma Leigh's plight did.
TG: At least we survived it.
LN: Yes! I so love a happy ending. 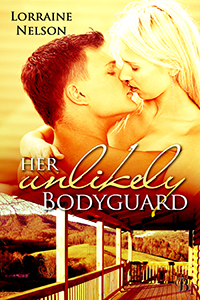 A stalker who wants revenge…a past flame rekindled…Jemma Leigh's summer just got interesting.

Jemma Leigh Harding has drawn the attention of an unknown stalker and returns to her hometown of Somerville, a safe haven—or so she thinks—on the east coast of Canada.

Theodore Garrity is the last person she expects to see, considering how easily he walked away from her after graduation to join the army.

Their past history involves secrets Jemma Leigh is hesitant to share. When it becomes clear the stalker has followed her home, Teddy becomes her unlikely bodyguard. Will the terror and past hurts separate them forever? Or will love blaze a fresh path for their future?

One lucky commenter will receive a free download of Her Unlikely Bodyguard at the end of the blog tour. Winner to be announced on June 30th. So leave your comments and/or questions and I’ll do my best to answer. :)

Thank you for having me here today, Romy and the minxes! It was fun! :)

Wonderful interview Lorraine! Teddy...maybe I could borrow you for a little bit?

Thank you all for visiting and for your lovely comments. :)