1. Tell our readers a little bit about yourself.
I’m Jane Linfoot, and I write fun, flirty fiction, with feisty heroines and a bit of an edge.
I live in a mountain kingdom in Derbyshire, England, which is less remote than it sounds, but is very muddy. When I write romance it’s the one time I get to wear pretty shoes instead of wellies. I love hearts, flowers, happy endings, all things vintage, most things french. I enjoy walking and gardening, and on days when I want to be really scared, I ride a tandem.

3. What inspired this book?
I grab my inspiration from anywhere and everywhere, then fuse the different strands together. With The Right Side Of Mr Wrong the heroine, Shea, was inspired by someone I met at a hen party, and Brando grew out of an article in a Sunday paper about a lonely rock star. The plot came from a TV programme I saw, where a playboy had a neglected castle he never visited, and the presenter suggested he needed a wife to help him with the project. It was a fabulous location, which looked perfect to use in a novel, and when I went on the website to find out where it was I discovered that lots of women had left messages on the website offering to marry the guy! Awesome! So The Right Side Of Mr Wrong grew from that!

4. Who or what was the inspiration for your hero?
Although I didn’t write Brando with Henry Cavill in mind, they’re not far apart.

5. In what way is being a published writer different to how you thought it would be?
Wow! Good question! I kind of imagined being a published writer would be about hiding away, writing books, but it couldn’t be more different from that. These days self-promotion is be a huge part of being an author, and keeping a high profile on social media is crucial. The promo side is much bigger than I’d anticipated.

6. What was the most fun part of writing this book?
Some books are a struggle, but The Right Side of Mr Wrong was a blast to write. I loved every bit of it, because I had such fun hanging out with Shea and Brando. You’d think it would be great to get to the part where you write “The End”, but by the time I got to that bit I had tears rolling down my face, both because of the emotion (even though it does have a happy ending!), and because I was so sad that my time with Shea and Brando had come to an end.

7. Which of your characters would you most like to be?
I’d like to be Shea from The Right Side Of Mr Wrong, because I’m totally in love with Brando (from the same book)!

8. Do you have a writing routine? Do you write every day, and is there a time of day that works best for you in terms of being productive?
I try to write every day – my favourite time to write is late at night, when the writing’s going so well I don’t want to stop.

9. How long does it take you to complete a book?
A book can take anything from six weeks to six months!

10. Do you have any tips, tricks or sacrificial rituals you do when you hit a story roadblock?
I always head off into the woods with the dog, onto a circuit that takes in an abandoned ice house. Usually by the time I’m a couple of hundred yards along the path ideas and solutions are popping into my head.

11. Where do you write?
I’ve always written in the room between the kitchen and the rest of the house – that way I see everyone as they pass, and I can easily dip in and out as the family needs me. 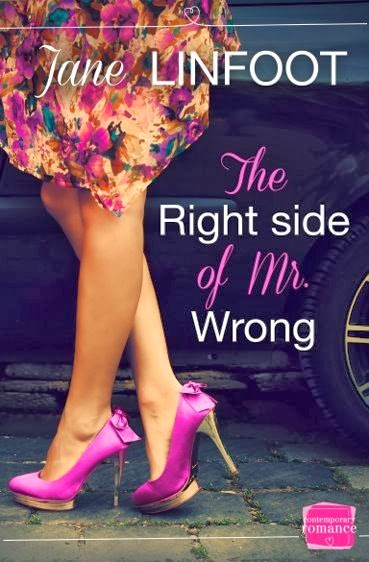 The Right Side Of Mr Wrong

One-off, moving on sex wasn’t meant to be this hot…
When determined singleton Shea Summers is persuaded to become the “wife” of the Lord of Edgerton Manor, the last thing she wants to do is play house with a stranger.

Brooding playboy Brando Marshall, is far from happy when Shea turns up at his sprawling estate with production crew in tow. Surely she’s just another woman after his wallet? And if she’s looking for Mr Right, she’s definitely hitting on the wrong guy. Then again, after catching an unscheduled glimpse of her knickers, perhaps Brando needs to teach this “gold-digger” a lesson!

She’s seizing the moment, he’s breaking the rules, and when bad boys can be so much fun, who can resist getting on the right side of Mr. Wrong...


The Right Side of Mr Wrong is available from Amazon and Amazon UK.

Love your cover, Jane. Best of luck with your latest release. Caroline x

Thanks so much for letting me be a Romance minx for a day Romy - I'm loving it! x

I do love the cover too Caroline - something so fab about those shoes isn't there? x

Thanks so much for letting me be a Romance minx for a day Romy - I'm loving it! x

I do love the cover too Caroline - something so fab about those shoes isn't there? x