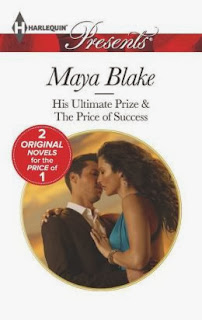 I’ve been dying for this book to be released ever since I wrote what became my debut book for Harlequin Mills & Boon, THE PRICE OF SUCCESS.

It's sequel, HIS ULTIMATE PRIZE was a joy to write. I know most writers say that but the truth is some books are tough, and some books, like this one, just FLOW. I know in most part it was because Rafael had been waiting a while to have his story told, and boy did that man have a lot to say!

Anyway, he got his wish and his official outing today.

And the good news is, not only do you get to read how Rafael wins Raven's heart, his brother Marco and his lovely heroine Sasha, have somehow also managed to slip in there! So my dear blog friends and readers, you’re getting what my US friends like to call a Twofer and we on this side of the Pond refer to as a BOGOF!!

Here’s the blurb for both. 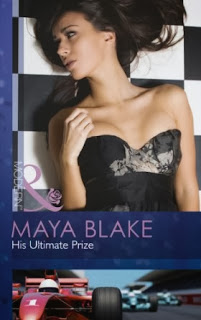 Winning is everything
Rafael de Cervantes was a devil behind the wheel and in the bedroom until his near-fatal crash. To mask his pain? He'll seduce his beautiful physio, Raven Blass!
Knowing she's responsible for his scars, will Raven risk discovery for one glorious night in Rafael's bed?

THE PRICE OF SUCCESS:

Owner of the Espiritu racing team, tycoon Marco de Cervantes thinks he knows exactly what's going on inside Sasha Fleming's pretty little head...She's clearly not above using her wide-eyed beauty and tempting curves to become Espiritu's first female racing driver. The infuriating thing is - she's the best driver around! Marco's willing to reap any rewards...on and off the track...but he couldn't be more wrong about Sasha. Unlike the socialites that flock round him she has no interest in being a billionaire's trophy wife - and she wills her body to prove this to him. But success always comes at a price!

Get it out and get stuffing :) And if you leave me a lovely comment, one of you will win a signed copy of your very own to stuff your stocking with!

Email ThisBlogThis!Share to TwitterShare to FacebookShare to Pinterest
Labels: 2-in-1, Harlequin Presents, His Ultimate Prize, The Price of Success

A scrummy two in one?! Sounds utterly irresistable. And many congratulations on your new release - have a fantabulous day! x