What number book is this? First? 100th? 200th?(Nora only!)
Well, Miranda’s Mount is my sixth book but I have number seven out in June and eight in October. Nine is underway.

Everyone who writes knows it's not easy - what methods do you use to keep at it on days when it would be so much easier to go shoe shopping?
I go shoe shopping. Seriously, I *do* go shopping. I tend to have very creative periods that last for months or even years then I hit a wall of nothing when I have no inspiration or motivation. I don’t write books when I feel down or spent and have had as long as six months off. But I do have commercial work during that time, and I just trust my mojo will return.

What is your top promo tip for other authors?
If I had one that worked I’d be a millionaire! I think that success has become increasingly random but I suspect that Amazon plays a huge role in making your novel visible. I have heard that if you can get your book bought alongside a best seller, that can be a huge boost to sales. Somtimes just having a similar cover or title can be enough – or happening to be in the right place in the market at the right time. How you achieve all these things, I don’t know. Unfortunately, I think price is vital in the UK too.

How does writing fit into your day? Or does your day fit in around your writing?
I treat it like a day at the office, starting early and finishing around 4.30 – then I go to the gym or for a swim and do more work when I get back. I plan long term projects like books around the short term deadlines of my commercial work and it all works out in the end!

Keeping fit: Do you have an exercise regime to counterbalance all those hours sitting at a computer?
Yes! It may not look like it but I go to the health club 5 times a week, for a combo of gym/swim and spinning. Mainly I go to try and de-stress and because they gym staff are often the first humans I’ve seen all day, and they have an outdoor pool, Costa coffee and newspapers. I love going and it helps to keep writers’ bottom at bay and is good for your cardio system and back. Blimey, that sounds boring ... but I also like surfing and I couldn’t do that if I didn’t at least try to keep fit (and I’ve a big birthday this year so I need to work harder than ever!)

Have you ever written a hero you'd be happy to run off with?
All of them – unless I want to run off with them, there’s no point in creating him! I would never leave my gorgeous, patient husband, naturally and there’s a bit of him in all of them. If I said I’d run off with Alex from my October naughty book, you might worry about me (OK. Maybe just for a day, if he was *very* gentle with me.)

At what point in your career did you actually start to feel like you were a writer?
Relatively recently. Probably not until I sold two books to Piatkus Entice – my first ‘big’ mainstream romances. I had two offers from really good publishers for those and when Miranda’s Mount won the Festival of Romance, I thought: well, maybe I am a proper writer. I’ve finally started to feel I have more control over my craft – sometimes!

Do you write to music, or with the tv on in the background, or do you need complete silence?
Radio or TV. I hate working in silence though I never hear a thing when I’m actually writing. They could announce the end of the world and I’d still be into my book when it all blew up!

And here’s a little about Miranda’s Mount, which you can buy from Amazon.co.uk and Amazon.com. 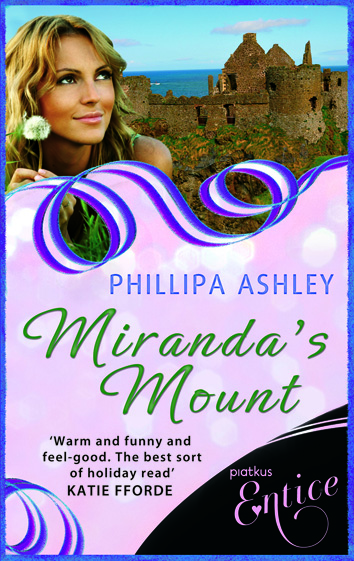 When Miranda finds herself fighting for her home, her job and her heart, sleeping with the enemy may not be the best tactic...

With no family of her own, Miranda Marshall has developed a healthy respect - some would say obsession - with other people's histories. As property manager of a spectacular island castle in Cornwall, she's made St Merryn's Mount one of the UK's most popular heritage attractions. While she may have the castle running like clockwork, Miranda hasn't bargained on its sexy owner returning to claim his birthright.

Dark, handsome and with a rakish reputation, Jago St Merryn not only looks like a pirate but is intent on flogging the Mount to a soulless leisure corporation. Miranda faces the battle of her life as she tries to persuade him to face up to his past and continue the St Merryn dynasty. But Jago has his own reasons for jumping ship and when he throws down the gauntlet to Miranda, she's forced to delve into painful memories she'd much rather keep hidden . . .

Thank you so much for joining us here today, Phillipa, it’s been lovely to learn more about you.

Thank you for having me, Minxes!

An interesting insight into the life of an author.

I love your work Phillipa. Really pleased you are so successful.
Alison Priest, Solihull.

Thanks for being in our spotlight today Philippa.

I am seriously impressed by how much effort you put into keeping fit. If I could claim the number of times I walk to the kitchen for coffee as exercise, I'd match you!

Thanks so much for joining us today, Philippa!

It's been fun learning more about you :)

Great blog. You are SO productive! Caroline x

Hi Caroline. Thank you (but did you see the bit about not writing for months. It's Feast or famine with me, feast at the moment. :))

Hi caroline - thank you but did you see my bit about also having months off (hides...)

Great to have you with us on the Minx blog, Phillipa - and lovely to find out more about you.