Movie Review - Only You 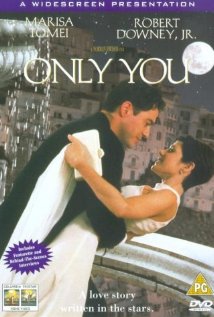 Every so often, an old movie pops up on TV, which, even though I've seen it loads of times, I have to watch. Only You is one of those movies. Made in 1994, it stars Marisa Tomei and Robert Downey Jr, and I love it.

Marisa plays Faith, a woman who believes utterly in destiny, and that every person on earth has a soul-mate. At the beginning of the film, when she is only eleven, she earnestly tells her brother, Larry:
Soulmates are our destiny.
We all have one.
My soulmate is the one I'm supposed to wait for, the one that will wait for me.

As an adult, without meeting Damon, she accepts the proposal of her exact opposite, the practical and unromantic doctor, Duane. But even then she longs for romance, watching romantic movies with a soundtrack of 'Some Enchanted Evening,' and declaring that love is all to her disollutioned sister-in-law, who plays the perfect counterpart to her romantic lead.

Ten days before her wedding, Faith learns that Damon Bradley is in Venice, and, dressed in her wedding dress (which she's trying on) immediately dashes to the airport to find him.

I won't spoil the ending by explaining any more about the plot, but I find this story beautifully crafted. Echoes run through it in complex webs. On a date with Robert's character, Peter, (while she thinks he's Damon), they have so much in common - so many things they both love, that it is obvious they belong together. As if to confirm it, a street musician plays 'Some Enchanted Evening' as they walk past, and they stop to dance in the street....
Swoon.

Thanks for the recommendation! I've never seen this one. I should def track it down!

I love this film, it's funny and sweet and Robert Downey jnr is perfect. And if you love Italy it's a joy; Venice, Rome, Positano - what more can a true romantic ask for.

I've never heard of this one Sally. but will look out for it now as it sounds like one i'd love.

I've watched this movie at least 3 times and I completely agree, Sally. It's one of those delightful movies you can easily watch again and again (especially for Robert Downey Jr!).