Man of the Month: Rugby heroes

*The lucky winner of Kate Walker's giveaway is TashNZ. If you would like to contact us via the blog, we will pass your details on to Kate, congratulations!!*

And from a winner in New Zealand, we move seemlessly on to today's Man of the Month poll. With the quarter finals of the World Cup coming up this weekend, what other types of heroes could there possibly be this month? As this is the Rugby Union World Cup, I wonder if the Minxes will let me do another rugby heroes post next month to celebrate the Rugby League Four Nations cup next month? Ahem ... perhaps not :-{

So with 8 teams left in the competition, let's have a look at some of the talent. 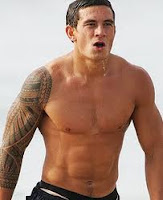 From the home nation, New Zealand, Dan Carter. I'm reliably informed by the lovely Jackie Ashenden that New Zealand is a country in mourning as Dan is injured and can play no further part in the World Cup :-{

Now this guy on the left, Sonny Bill Williams, I know a little about as he played rugby league before defecting to the 15 man game {for those who are interested, there are only 13 players on each team in rugby league}.

From England we have the ever youthful Jonny Wilkinson, he seems to have been playing *forever*. Just as Dan Carter is New Zealand's favourite, so Jonny has English hearts--and not just those who enjoy his skill on the pitch!!

On the right is a guy, James Haskell, I'm so glad Romy Minx suggested for this poll because he looks as though he has great ball skills!!

And from South Africa, we have a man I am reliably informed is as nice in person as he is looking! Percy Montgomery. Not that I am picking pictures solely on how many clothes these rugby players have on {or off!!} but he is the blond guy without the top :-}

Also South African is Victor Matfield, I think he looks like a perfect Presents hero *saves picture in hero file*.

From Italy, who sadly are no longer in the competition, but perhaps it will give Sergio Parisse more time to have such excellent pictures taken!! In his spare time, Sergio models for Dolce & Gabbana.

And finally, last but definitely not least, here is Argentinian Juan Martin Hernandez who I managed to find while taking time to fully research and perfect this post {I know, my attention to detail is admirable!!}.

I should take the time to let you know that last month's poll was a dead heat between the fastest man on earth, Usain Bolt and the fastest man on no legs Oscar Pistorius. Incredibly apt and a wonderful result :-}
Posted by Catherine Coles at 10/07/2011 10:59:00 AM

Oh Good Lord!! I pop onto the Minxes to meet Kate Walker and instead get an eyeful of seriously gorgeous Ruby World Cup eye candy.. Talk about distracting, I hope you lot realise you've just given me rather more inspiration than I need for a Friday morning!!

My eyes, my eyes! OMG, I think I need to see a doctor! Whoaaaaaa...

I know, Heidi, it was hard work but some poor little Minx had to do it!!

It's possible this post has now taken over my previous favourite which was the policeman poll :-}

Maya, the doctor would suggest you spend some time googling other pictures of these gorgeous guys as that is truly the best cure :-}

Sigh...did you say something, Jo? (glazed over)

Wow! What a delicious choice- but you forgot my favourite, Ben Foden. Scrape me up off that pitch.

What? No Mike Phillips?

Sadly I can't take credit for knowing that much about rugby. I'm the ditsy blonde who once asked where the goalkeepers were. That said, I might just become a massive fan thanks to this post and your (ahem) research.

Catherine - this voting thing is really hard. In future, I think we should allow people to vote for more than one option! (ie. indecisive people like me)

Hotnessss!!! Those are some serious eye candy!

Thank you so so much! It's all we seem to be talking about in NZ at the moment re the RWC11... and i'm on the edge of my seat at the moment SCREAMING at Ireland everytime they get the ball... my work pics are on them and currently I'm second... eek.. anyway i just wanted to share this with everyone. Check this link out. Jay Jay from a NZ radio station each week picked hot players as the teams were playing... we voted and basically she's ended up with a "Dream Team Top 15"... have a look, see if your players are on the list xoxo http://www.theedge.co.nz/Events/JayJaysDreamXV.aspx#/Portals/0/AM/2011/10/6/17512/Sonny-Bill-Williams.jpg?quality=70

Alas poor Dan.... Ah SBW. You have seen the famous shirt scene I take it? Even my mother was impressed. :-)

Just stopped by to visit, LOVE the word "minx" but oddly my Editors are ALWAYS deleting that word from my novels. (What, they had no minxes in Ancient Egypt???!) Know nothing about rugby but wow, after this particular blog of yours, I may just have to leave NFL football behind and become a rugby fan!