If you haven't yet heard of Jeannie Lin, then I can only assume you've been hiding in a cave somewhere. Everyone's talking about Jeannie's debut novel Butterfly Swords and the reason is obvious: it's strikingly different, it has a fascinating setting, and it's a great book.

So we are very excited today to have Jeannie with us on the blog today answering our Minxy questions. Now let's hand over to her ...


* * *
Thanks for inviting me for the Author Spotlight!


Where were you in your writing career 5 years ago?
Perfect timing! I can hardly believe it was pretty much five years ago in October that I took a UCLA Extension Romance Writing class with Barbara Ankrum. I was sitting down in a class with barely an idea in my head and ready to absorb all there was to know about writing romance.


Where did you get the idea from for this particular book?
This book was actually a sequel to my first completed manuscript. Ryam, the hero of Butterfly Swords, was a secondary character in the first book. He was a bit of a screw up; kind of reckless and cocky and charming with women. The one line that described how he sees himself was always strong in my head: “A genius with the sword and a disaster in everything else.”

I envisioned a vagabond who’d been separated from his friends by a tragedy he created. From that, I imagined he’d have to redeem himself, but could only do so as a reluctant hero. I tried to match him with several possible heroines, but the perfect one was a girl who on the surface would be his opposite. Ai Li was thoughtful and honorable and always followed the rules. Their common language would be the sword and, from that moment, I had both her signature weapons and the title figured out: Butterfly Swords.


Where do you hope to be in 5 years time?
Big Hope: Figure out how to have writing as a sole career.


Which was the last book you read that you wish you'd written?
Great question! Khaled Hosseini’s Kite Runner. I don’t think anyone but Hosseini could have written that book, but there’s a scene in there that I can’t get out of my head when the boy walks out in a clearing and the kite practically falls into his arms. If you’ve read the book, you know how pivotal that scene is in its placement within the story. It was absolutely critical that the writing delivered in that scene, and it did. I don’t know if I have a scene or a book that beautiful in me.


Was there any particular author or book that made you want to be a writer?
If I had to pick one person, it would be Ray Bradbury. I’ve read a couple of his short stories over and over, and they get me every time. “The Laurel and Hardy Love Affair” is one of them. “The Toynbee Convector” is another. No matter how many times I looked over the words, they never lost their power. I think he’s the first writer where I realized there was such a thing as craft and that a story had an impact on me because the author made it so. He was also the first author where I sought out more stories he’d written. Before that, books just came by my hands. I would browse by them at the library or had books assigned by teachers for book reports and such.


Do you find writing love scenes giggle-worthy or cringe-worthy – or neither?
Neither. But re-reading them is both giggle-worthy and cringe-worthy to me. I psych myself up and I write them once. And if I have to rewrite them, it’s likely I’ll scrap the first version and rewrite the entire thing. It’s my superstition that if you overthink the sex too much, you’ll ruin it. People know how it is: sex is rarely “perfect”, but it’s still pretty good if the mood is right, right? So there’s my confession. The least edited scenes in my books are the sex scenes.

What's the most romantic moment of your life so far?
My hubby spent a good decade wooing me before we married. There was one time while we were dating when he was telling me how stubborn I was. That I was being too cautious and overthinking everything. This is real funny if you consider that he’s a computer programmer through and through, totally methodical and analytical.
In a goofy moment, he laid his head on my chest. “Are you in there?” he called out, addressing my heart. “I’m talking to you.”

That was the moment.


What do you wish you'd known about being an author before you were pubbed?
This was a toughie—I had to think about it for a while, which means it’s a good question!
Here’s what I’d wished I’d known: All those times people nitpicked my sentences apart, and I stressed about fixing every little issue didn’t matter. What really sold was Voice and Character. I shouldn’t have been revising on the surface so much. Instead, I needed to focus on layering in depth. I learned that a LOT is fixable, almost everything, but if you don’t have enough depth in the writing, no editor will stick around and show you how to go there.


What's the best writing advice you've ever been given?
From Barbara Ankrum: “Keep writing forward.”
From my sister, when I lamented about not being able to write sexual tension as well as Barbara: “That’s not her first draft.” 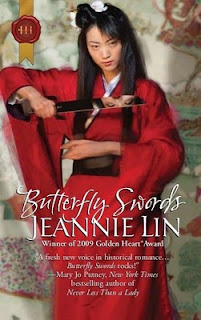 Tell us about your latest release.
Butterfly Swords is my debut novel, officially released October 1 from Harlequin Historical. It’s set in opulent Tang Dynasty China and features a forbidden love between a western swordsman and an imperial princess. I hope readers will come for the sword fights, but stay for the romance.


What’s next for you?
The sequel is currently titled, The Dragon and the Pearl. There’s also a linked Historical Undone that I’ve written for it. They’ll hopefully be released together.

Her linked Historical Undone novella, The Taming of Mei Lin, is available at eHarlequin and on the Mills&Boon website.
Posted by Romy Sommer at 12/01/2010 08:51:00 AM

Thanks so much for going Minxy for the day, Jeannie! I love the sound of Butterfly Swords! And you have a very wise sister. That's not her first draft is the best advice she could have given. Its easy to be attacked by the crows of doubt, but that advice bats them away!

Thanks for having me! I remember this interview. I loved your questions. They made me really think back. It was a pleasure!

@Sally - My Little Sis is my absolute lifesaver. Her answers always assure me that it really is that easy, and that hard. LOL

I read an excerpt of Butterfly Swords a while back and totally loved it, Jeannie. My TBR pile is toppling over at the moment, but come Christmas there should be more room for Butterfly and I can't wait to read it! Thanks for giving us a chance to know you better and good luck on your writing journey :)

Glad you liked the excerpt Maya! And I do understand about that TBR. I had a road trip down to Louisiana and back for Thanksgiving and was able to take in some books on my Kindle. Loved it!

My sister calls my ability to read in a moving car my "mutant power". She gets carsick.

A fascinating interview Jeannie! I'm always interested in what successful authors wish they had known before they were published and I'm intrigued by your answer. Invaluable advice!